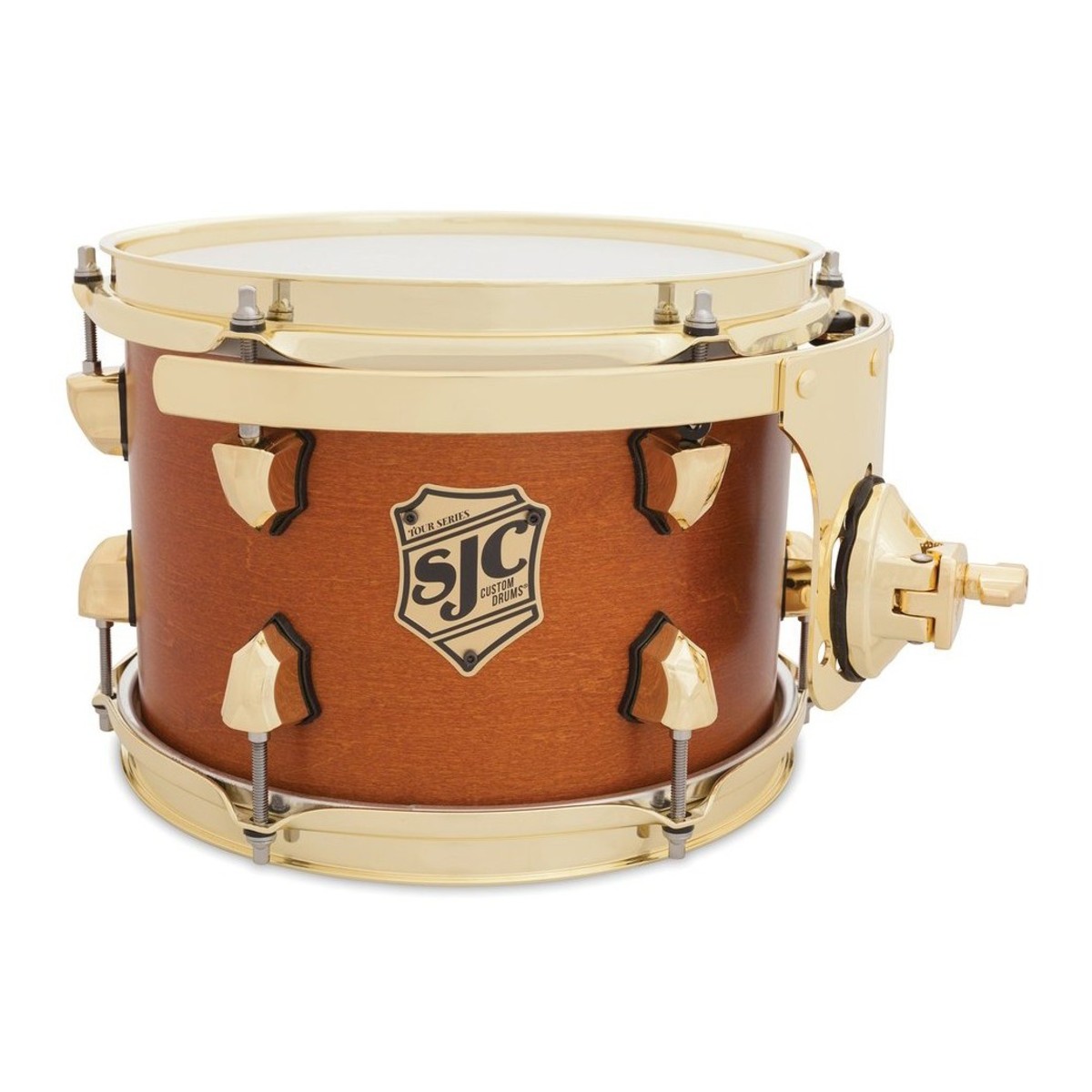 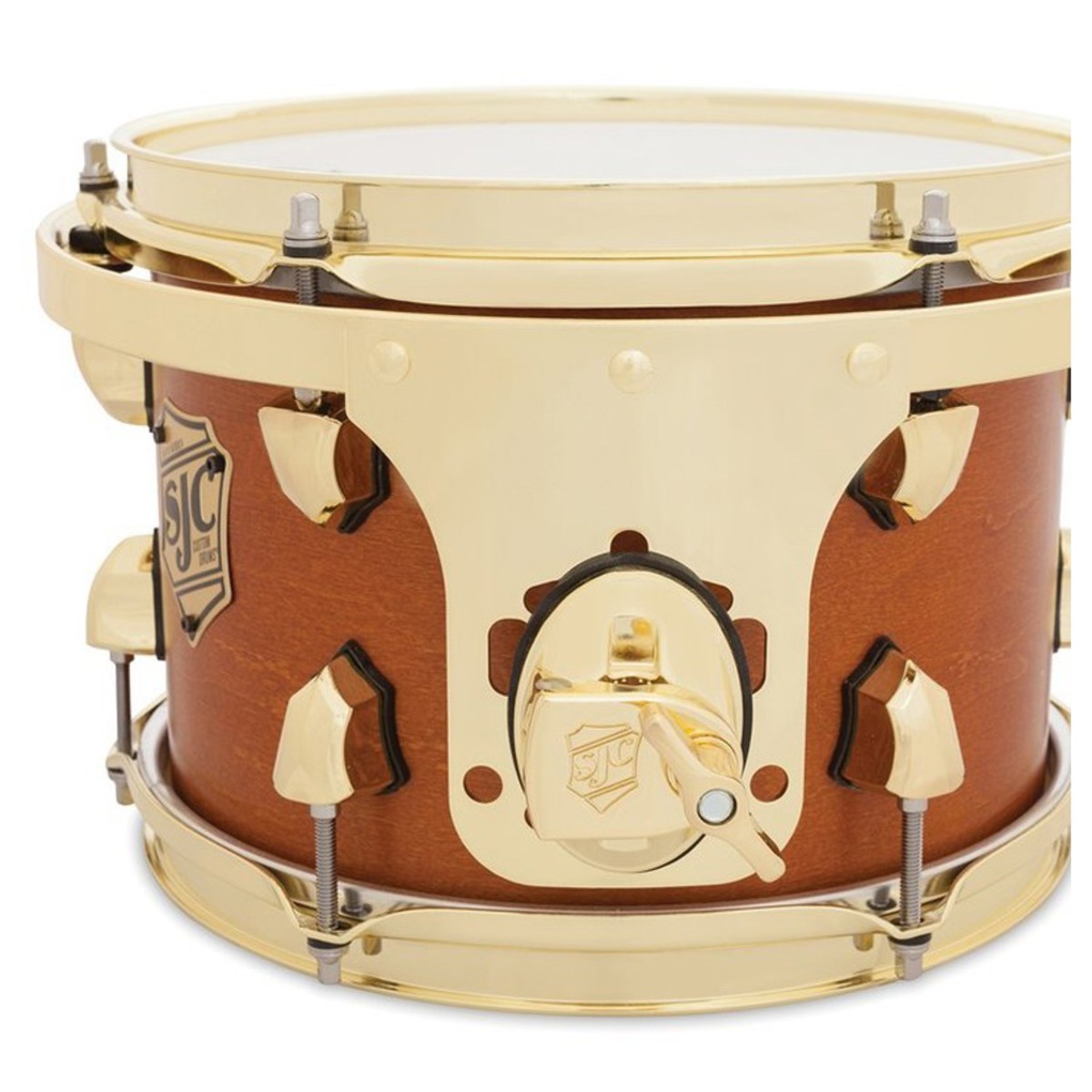 This product is currently not available for purchase

View this description in German

The SJC Drums Tour Series 10'' x 7'' Tom is the perfect add-on tom for SJC tour series drum kits. The tom features a 10'' by 7'' design, making it ideal as an extension if you are limited to a single rack tom. The tom features a 100 percent American maple shell with a golden ochre satin stained finish, offering a rich sound with clear mids and highs to accompany the punchy low frequencies. SJC 45 degree hand cut bearing edges are designed to enhance shell resonance and tuning stability. Known around the world as the most exciting drum manufacturer today, SJC Custom Drums continue to push boundaries and deliver excellence to even the most demanding drummers.

Please note: When you buy SJC drums from Gear4music you will make substantial savings against the cost of direct shipping from the USA, and EU import duty charges. For more information please contact us.

The SJC Drums Tour Series 10'' x 7'' Tom has been created with a comprehensive versatility and powerful tone that brings rich attack and deep resonance, making for a formidable sound. Although adaptable to a variety of different genres, the SJC Tour Series Drums are perfectly suited to the rock, punk or hardcore drummer. Every drum is individually tuned to ensure that they are ready to be played upon arrival, meaning that SJC'S astonishing tone is at the player's immediate disposal. Building on their legacy of manufacturing dynamic and versatile drums, the family orientated SJC brings unprecedented tone and definition to a new generation of drummers.

With a great sound also comes a great aesthetic. The golden ochre satin stained finish upon maple gives the kit a distinctive vintage look and feel whilst maintaining its smooth tone, resonance and attack.

With humble beginnings in Mike and Scott Ciprari's (SJC) Grandmother's basement, SJC has since developed into one of the world's leading drum manufacturers and suppliers. In the beginning, the brothers were determined to pioneer the sound of a generation tirelessly seeking to improve themselves and their drum kits until they had reached a state of perfection. As the brother's skills progressed and they got better at building, they thought it a good idea to get some of their friends to play their kits and start to spread the word. Bands such as 'A Wilhelm Scream' and 'Strike Anywhere' were some of the few endorsements from the brothers. SJC's turning point came when the musical sensation 'Panic! At the Disco' played the MTV music awards in 2006. This pivotal moment enabled the brand to branch out and endorse a variety of bigger and more diverse bands like 'Hawthorne Heights', 'Aiden' and 'Cobra Starship'. Expanding their already impressive artist roster, SJC began to reach unprecedented heights and managed to move out of their grandmother's basement and into a warehouse, enabling SJC to introduce a small number of new dedicated staff.

Embracing the game of innovation, SJC has consistently created drums that produce a high-quality tone and a distinct character, often to the exact specification of high profile artists. In the last two years, SJC has signed drummers Branden Steineckert (Rancid), Cyrus Bolooki (New Found Glory), Zach Lind (Jimmy Eat World) and Tre Cool (Green Day). With all these world-renowned artists previously being endorsed by huge international companies, it speaks volumes of SJC for their desire to switch to a custom company.

Always on the cutting edge of innovation, SJC has always focused on making the drummer the focal point of any performance.

With a virtually endless list of custom options, SJC prioritises the drummer's specific requirements whilst never compromising their classic and unique sound. With an ever-expanding list of big names upon their roster, SJC has been a consistent choice for many renowned drummers the world over, emphasising their commitment to quality and sound.

"I've played on literally every brand of US drums out there, and I've finally found my home. I've been looking from drums like these my whole life. True American hot rod custom kits. From the look and sound to the service and attention, it's good to now be part of the SJC family." Tré Cool - Green Day

"I have no clue how I just barely started playing these drums, they sound incredible! Not sure what rock I was living under. I can't express how proud I am to now be part of SJC and get to play these amazing drums every night." Dave Joyal

"Me being real and honest: I am so proud to play SJC Drums. They have treated me so well since I started playing them 5 years ago. Thank you!" Rian Dawson- All Time Low

Select your country and language to see local prices and delivery options.